I was really doubting my sanity as Wayne drove the both of us south west along the M5 from Bristol towards Torbay. The sky was a leaden grey, the wind was blustery, the rain lashed the car and the air temperature was 0.5°C according to the dashboard thermometer. Today was not obvious sea kayaking weather despite last night's forecast for today being rather more optimistic than the reality. My goose down duvet was rapidly becoming a distant memory!

Arriving in Paignton at 9.40am it was clear that conditions here were exactly like on the motorway, although at least the wind was not so blustery. Now it was a consistent F5 NE and the flag on the end of the sea wall was taut, rigid as if made of a sheet of hardboard. Hmmmm. The bay was like a painter's palette of shades of grey; ash, battleship, slate, smoke, silver and maybe even dove, it was almost two dimensional, as if the day had dawned before God was able to colour it in. But it wasn't all grey, the monotony was broken by the surf and white-caps beyond the sea wall. I couldn't quite remember why I was here, Wayne said something about it being bracing and character building and it was due to improve. I wasn't convinced.

Esther arrived with her Romany and pulled up behind us on the slipway. We had a team talk and made noises about it being a good way to start the new year, it's not that bad and what else would we be doing on a cold wet miserable Sunday in January? "Staying in bed with a lover" fleetingly crossed my mind. I wouldn't quite go as far as saying that the optimism and enthusiasm of the group dragged me along with it, but I did start to feel that now I'm here it would be good to contemplate getting out on the water, or at least trudge around a bit and have a cup of tea.

Since the kindly folk in the Met Office had undoubtedly been suffering from a New Year hangover when they had rustled up today's forecast it seemed rather appropriate to get something more up-to-date. Fortunately a small chandlers at the top of the slipway was open, the owner having missed the chance to spend the day in bed with his lover. Quite who he thought he'd have as a customer on such a godforsaken day was beyond imagination since the only other living things within a two mile circumference of Paignton harbour were buried snugly in the sand at the foot of the slipway. He was, perhaps understandably, pleased to see us and even though I only wanted to use his laptop he remained jovial and positive. His assertions that the day was to improve were borne out by XC Weather, with the wind to drop to a F3-4 by mid afternoon. OK then, let's do it.

We nosed out of the harbour just after low water, the plan was to head out and judge the conditions down towards Brixham, and if we weren't totally happy we'd head NNE to Torbay since some of the route would be sheltered by Hope's Nose. Once out of the shelter of the sea wall the wind and sea state felt quite intimidating since it was only my second time in the new boat; the bay was shallow on the low tide and the wind was pushing the ground swell hard into the bay. Wayne and Esther didn't appear entirely convinced either and there was unanimous agreement to head to Torquay. What a contrast, the conditions couldn't have been more different to the end of year paddle with Richard down in St Ives on 28th December, it was hard to believe that only five days earlier it had been a spring-like 11°C with almost wall to wall sun. Our climate really is a mess.

At first Morwenna felt rather too twitchy under my backside, necessitating the odd brace, but as we headed north east my confidence in the boat grew, the rain lessened and the Typhoon dry suit kept me warm and dry. Even my fingers were pretty warm since I'd invested in a pair of Peak UK open palm mitts, and thoroughly recommended they are too. New year cobwebs were well and truly blown away and I was glad that I'd persevered and made the effort. We made remarkably good progress almost directly into the wind and I started to appreciate the comments I'd heard about the Cetus MV being a fast boat and regardless of the wind, rain and Baltic temperature this all suddenly made sense, I was back on the sea and in control of my own destiny. Well almost.

As we cut across the bay Wayne was wanting to play in the surf, however spurred on by the thought of hot tea and food he didn't get the chance. By now we were benefiting from the shelter of Hope's Nose to the north east and the sea state and wind started to drop away. Oh this was good, the cold greyness of the day didn't dull the warmth and enthusiasm within. The day was still a palette of grey but was no longer two dimensional, it had depth and tasted of salt. 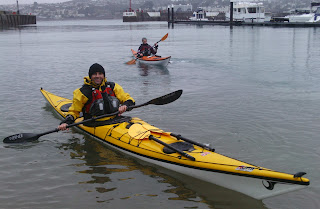 Passing through the mouth of Torquay harbour was like entering another world, it was suddenly calm and flat, and so we poked around the pontoons admiring some of the fine boats moored there. The inner harbour was gated so we cut around the back of the pontoons and under the concrete matrix of the North Hard. Wayne made interesting graunchy noises as he scraped across one of the barnacled cross braces, but Esther and I (being more svelte?) glided above it. We popped out right at the back of the pontoons surprising a couple of very excitable spaniels in the process. We were evidently the most exciting thing they'd seen for at least five minutes and one of them was very close to leaping from the pontoon onto the rear deck of Esther's Romany in excitement, and when it didn't I feared it would have a go for mine. Thankfully it had a rare flash of rational thought and didn't, but it was a pretty close thing. 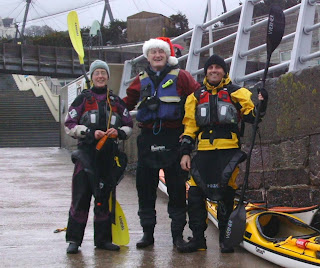 While hauling the boats up onto the slipway a couple of well wrapped walkers expressed their concerns about our sanity for kayaking 'in this weather', thoughts I'd shared only an hour or so previously. Just above the slipway was a small cafe and whilst Wayne was set on fish and chips and decided to head into town to find some, Esther and I sat at a rain lashed outside table and eyed up the menu. Almost immediately the owner came out and insisted that we went inside and sat on a rather nice leather sofa, despite our protestations about our wet kit. Two paninis and Earl Greys later we met up with Wayne who had befriended the two excitable spaniels and was feeding them chips. 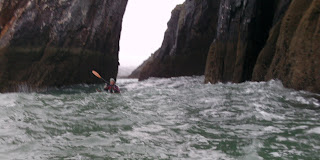 Back on the water we paddled across to a natural arch known as London Bridge, made all the more interesting by a reasonable swell. Wayne in his plastic boat went straight through, Esther hung around to get the rhythm of the sea and then went for it but I couldn't quite commit a brand new boat to the swell in such close proximity to some fairly sharp rocks, I was just not brave enough. Perhaps next time. Then onwards towards a couple of breaking rocks and, throwing excessive caution to the wind, I cut between them with little drama.

Returning south westerly across the bay the wind had dropped back to F3, so we hand-railed along the beach just out of the surf zone. Wayne couldn't resist and finally got to play in the surf and as we neared Torquay's Victorian Princess Pier I nearly took a swim as a larger wave unexpectedly broke just as it passed under me. We paddled directly through the pier structure and then onwards to the shelter of Paignton harbour. 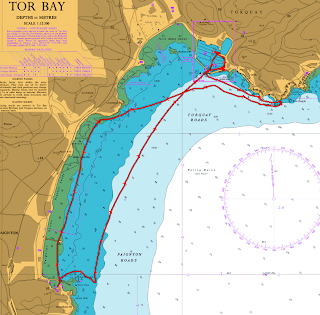 Paignton harbour wasn't any busier than when we left, although the flag was not nearly as taut as it had been three and a half hours earlier. We packed the gear and headed our way back up the M5. Despite the weather and my earlier misgivings we had a great day paddling, proving that making the effort really does pay dividends, it would have been far too easy to have stayed in bed, with or without a lover.


Text and images are not authorised for reproduction in part or whole without permission of the author. (c) 2011
Posted by Celtic Paddler 0 comments